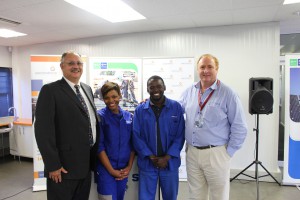 The Master Artisans Academy of South Africa (MAASA) has trained 1000 electricians and electrical engineers in the rooftop installation of photovoltaic systems in the last twelve months. The programme, implemented nationally in partnership with Enel Green Power SA , an Italian based Independent Power Producer (IPP), is part of building a credible skills base for the growing retail renewable energy sector in South Africa.

Speaking after the training of the last 19 of the 1000 trainees at the East London Industrial Development Zone Science and Technology Park (ELIDZ STP), Willie Gresse, Director: Operations at MAASA, said the training was one of a suite of training offerings offered by the institution and tailored specifically for the South African renewable energy sector.

“The programmes are focused at building a reputable skills base for the renewable energy industry and the PV rooftop installation one is structured to capacitate electricians with the knowledge and skills required for PV installation – a fast growing trade in the country,” said Gresse. He added that added objectives for the PV rooftop installation programme, specifically, was to lay the foundation for future retailing of the photovoltaic rooftop systems in various parts of South Africa whilst pioneering the development of Small Medium and Micro Enteprises (SMMEs) in the sector.

Explaining the introduction of renewable energy related training programmes within MAASA, Gresse said the Academy had , as part of its strategy, taken a decision to package these to ensure continued relevance of its trainees in the changing South African economic landscape. “The reality is that renewable energy is a critical solutions to the current energy challenge. In line with this we introduced the programmes that would widen the scope of our artisans and allow them entry into the new sector,” he said.

Gresse said that MAASA had also set up a specialised renewable energy division, which amongst its initiatives has also partnered with the ELIDZ STP to set up a Renewable Energy Centre of Excellence – the only licenced Solateur School in South Africa.

The partnership has seen the piloting of a three year training programme for 20 young school leavers from East London. The programme started in 2013 and the trainees are now in their final year of a formal apprenticeship programme. “They are currently doing their in-service training with various local companies, with a substantial number having absorbed by some of the industries in the ELIDZ. After the completion of their in-service training this group will be among the few qualified electricians in South Africa with a renewable energy specialisation,” said Gresse

The partnership with the ELIDZ has also allowed MAASA to be a training ground for the prototype testing. “There are currently various renewable energy prototypes that have or are in the process of being developed within the STP. Our positioning, within the STP allows our students to be involved in the monitoring and data collection process for some of the prototypes. It also allows for collaboration with other players within the park, said Gresse.

ELIDZ Chief Executive Officer Simphiwe Kondlo, said the availability of a credible skills base was one of the key considerations that are made by companies when selecting a location for investment. “As the ELIDZ, we have been vigorously promoting the zone as an ideal location for renewable energy investment. We have a strong pipeline of investments in this sector with at least three companies being at advanced negotiation stages. Programmes, such as the one being driven in partnership with MAASA strengthen our value proposition and gives us a competitive edge over other locations,” said Kondlo.

This template supports the sidebar's widgets. Add one or use Full Width layout.